Although poor Wisconsin is one of the few states where not a single dinosaur has ever been found, that should not suggest they don’t offer us enthusiasts something special. This past summer I visited the Dinosaur Discovery Museum in Kenosha and, though relatively small, had a suprisingly cool collection. 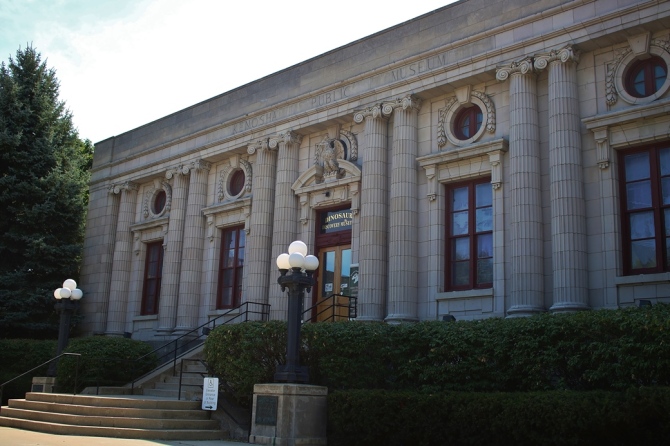 It was a sunny weekday afternoon and my friend and I had no trouble finding parking. We walked across the street towards a lifelike statue of Dilophosaurus standing on the museum’s lawn. It was in a scenic area that actually had an old-fashioned streetcar driving through it. The building itself was beautiful and there was no charge, just a suggested $2 donation. 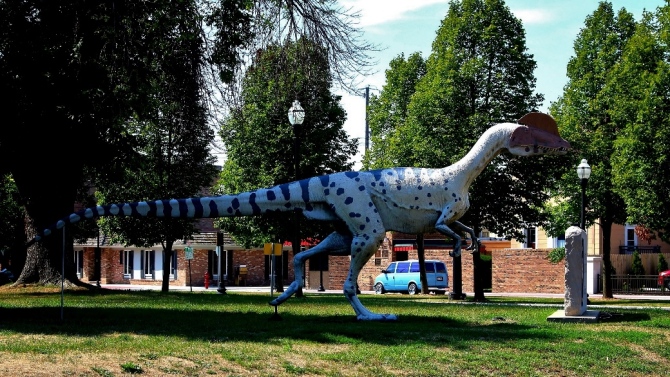 When we entered the main foyer we saw several display cases with real fossils from the Hell Creek Formation in southern Wyoming. These were collected by representatives and volunteers of the museum during excavations led by Paleontologist Dr. Thomas Carr; Curator of this museum and a faculty member of Kenosha’s Carthage College. Carr’s specialty is Tyrannosaurus Rex and some of his earlier work helped identify several “species” of theropods as, in fact, juvenile T-Rex. Among the many fossils uncovered during Carr’s excavations were three individual T-Rex and several Triceratops.

Most museums focus on the evolution of dinosaurs and their place in Earth’s natural history. What sets the Kenosha Dinosaur Museum apart is their focus almost exclusively on theropods (meat-eating dinosaurs) and their connection with modern day birds.  Consequently, if predatory dinosaurs are your favorites, you’ll likely see the largest concentration of their skeletal replicas here. 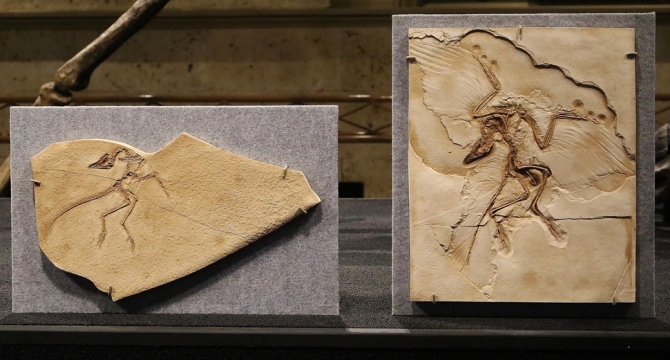 When we walked in to the main exhibit area, we decided to let T-Rex lead the way!

One of the questions we often ask ourselves is how meat-eating dinosaurs compared with each other in terms of size. Having an opportunity to see so many different ones standing together was a rare way to see for ourselves. I was particularly happy to see some of the rarer ones alongside T-Rex such as Carnotaurus.

At this date, only one Carnotaurus specimen has been discovered and is currently on display at the Argentine Museum of Natural Sciences. Kenosha’s was cast from it saving me a trip to South America. 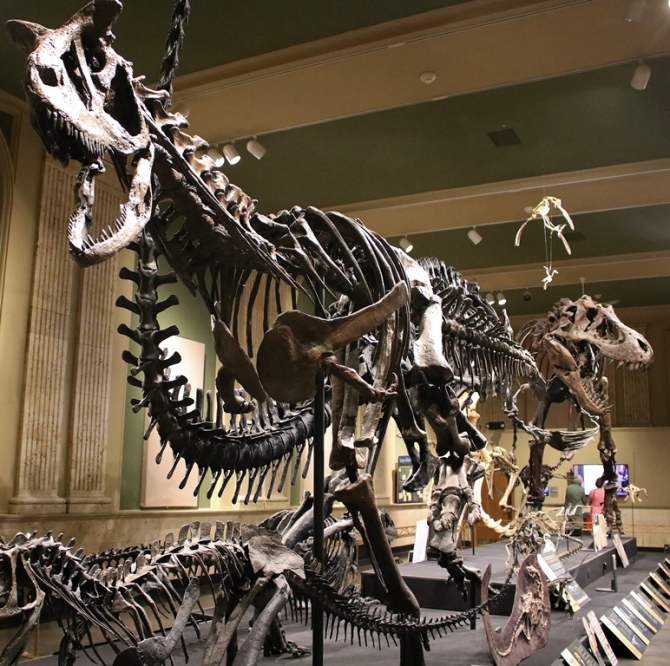 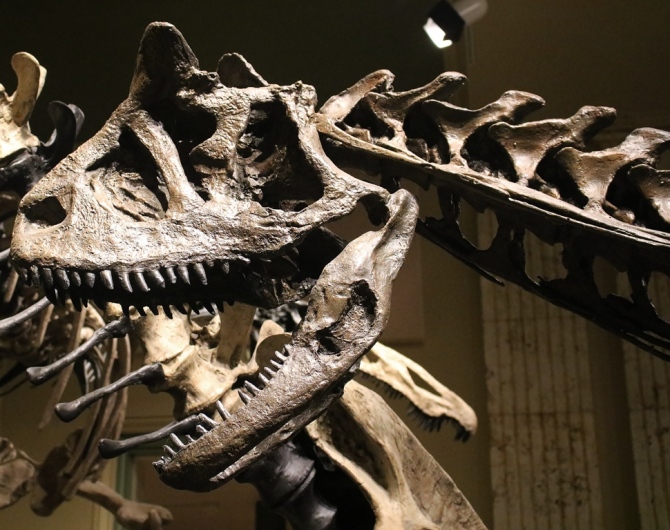 While the largest predatory dinosaur on record, Spinosaurus aegyptiacus, was conspicuously absent, one of the other members of its family was here to represent. Suchomimus (which means “crocodile mimic”), was quite impressive even without a Jurassic Park depiction. It did, at least, get an honorable mention. In Jurassic Park III one of the characters incorrectly suggests that the maurauding Spinosaurus is in fact Suchomimus. 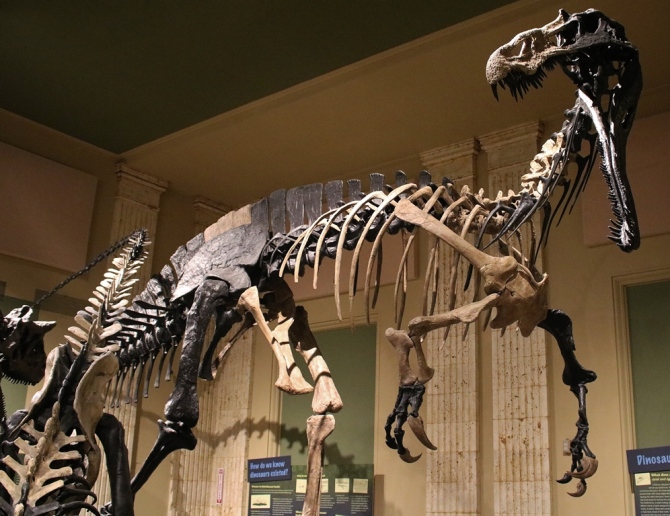 Another rare treat was getting to see a Torvosaurus on display. This dinosaur, unearthed here in the United States, is currently being scrutinized as possibly being the largest predatory dinosaur of the Jurassic Period. 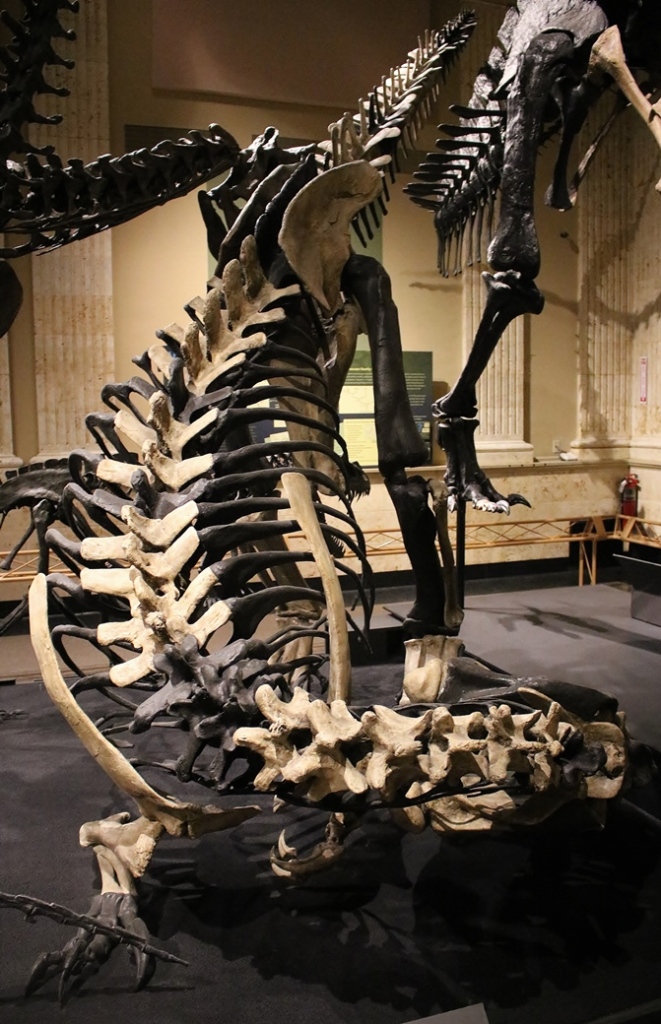 Acrocanthosaurus (“high-spined lizard) is yet another large theropod from North America that often gets eclipsed by T-Rex. This dinosaur is notable for having spines that stretch from head to tail and its impressively large teeth suggest it was likely a powerful hunter.

The way they displayed their Allosaurus was almost as if it were sitting on a clutch of eggs. This was definitely different from any of the speciemns I’d seen before. 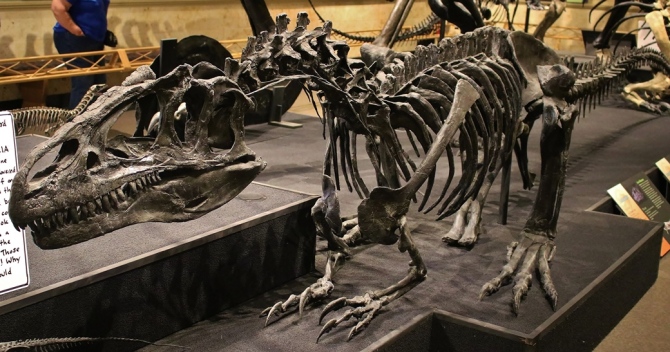 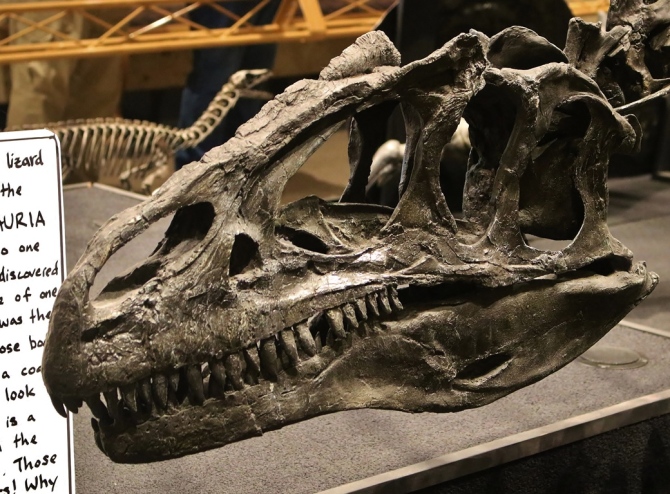 The transition from theropod dinosaur to bird became even more evident with the discovery of feathered dinosaurs. I’ll let Mr. Darwin introduce the next one…

I loved their gift shop which carried dinosaur models from multiple companies such as Wild Safari Ltd (including retired Carnegie pieces), Schleich, and Papo.

Of course purchasing Papo dinosaurs at a gift shop will cost you an arm and a leg but, unlike the cheaper ones online, at least you can get a really good look at their detail and sizes in person.

I ended up purchasing a relatively inexpensive Stegosaurus for my shelf back home.

The Dinosaur Discovery Museum in Kenosha is definitely worth a stop! I loved their collection and, although it’s almost two hours from where I live, plan and visiting a lot more in the future!

One thought on “Kenosha Dinosaur Discovery Museum: a Collection of Carnivores!”