Earlier this month, my friend and I froze our butts off visiting Pittsburgh. We’d planned the trip a few months back, choosing Pennsylvania as our meeting place since it’s halfway between his Rhode Island and my sweet home Chicago. We were celebrating his fiftieth birthday and I had an entire weekend of activities planned; none of which he knew anything about and would all come as a surprise. Thankfully, he’s a big dinosaur fan like myself and, with but a few exceptions, most of my prehistoric pit stops have been with him. So I’m pretty sure that of all my “surprise” birthday activities, this one was probably the least shocking. I mean how could we pass up our chance of finally seeing the famed Carnegie Museum of Natural History whose diplodocus specimen was once an International sensation? 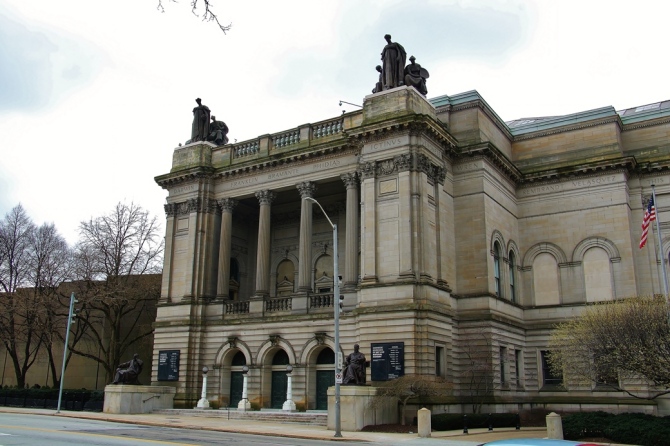 As it was a Sunday, the museum didn’t open until noon and we rolled in from Erie at about 10:30. This was a mixed blessing as we managed to find excellent free parking right along the museum but still had ninety minutes to kill in the frozen, dead streets of Pittsburgh. Needless to say, after walking a couple of blocks, our limbs were sufficiently numb from the cold. Seriously, you could have stuck a needle in my thigh and I doubt I’d of felt it. We did our best to stay warm, stopping in an old bookstore that, thankfully, opened just as we passed it and then eating an early lunch at a Quiznos. All this, of course, was only after we paid homage to the museum’s unofficial mascot, “Dippy the Diplodocus.” 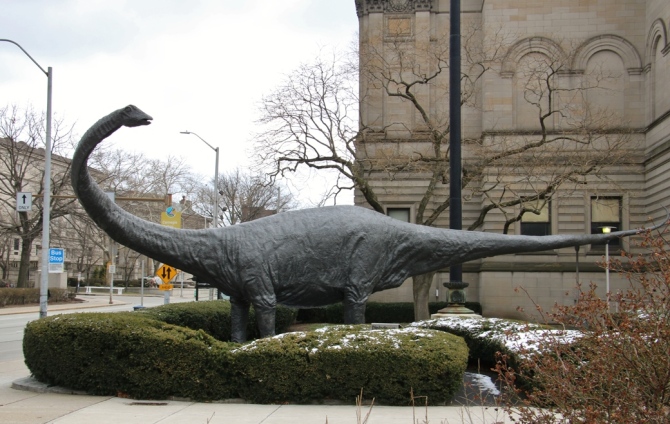 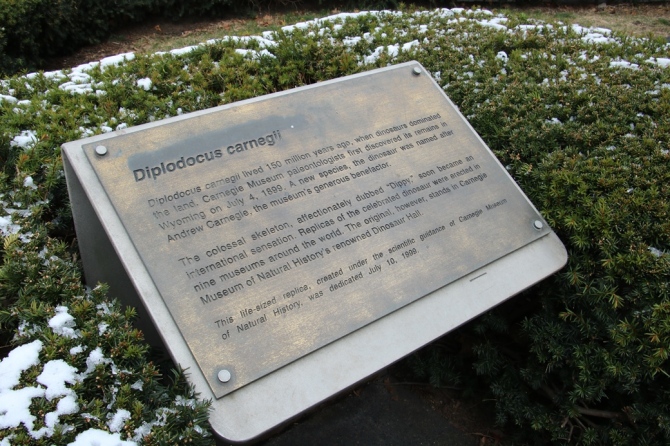 The real “Dippy” was unveiled to the public in 1905 and was, quite understandably, a game changer. It was not only the largest creature ever discovered on Earth at that time but successfully help put the United States (always lagging behind Europe in terms of scientific innovation) on the cutting edge of Paleontology. Cast replicas of the Sauropod made its way all over the world (my local Field Museum of Natural History also has one). This fiberglass sculpture is decisively younger, having been created in 1999 as a 100th Anniversary tribute of Dippy’s discovery.

There’s signage for the dinosaur right below Dippy, amid some bushes. I snapped a photo (posted above) since it way too frigid to stand around reading. All thoughts of winter were gone as soon as the clock struck noon and we made our way inside the museum. I’ll be sharing those photos soon (right after another toy review)!

2 thoughts on “Carnegie’s “Dippy the Diplodocus” gives a Pittsburgh-sized Welcome!”