Earlier this year I covered the Rocky Mountain Dinosaur Resource Center and mentioned their amazing cast of an Anzu Wyliei. Named after an ancient Mesopotamian demon, this animal (initially described as the “chicken from hell”) has the distinction of being the largest feathered dinosaur ever found in North America. With multiple specimens uncovered, it would also become the most complete Caenagnathidae (family of bird-like theropods) ever found. Discovered in 1998 and described in 2014, it’s now further solidified itself in Dinosaur pop culture with an ALL-NEW 2018 model courtesy of Safari Ltd! Though this represents the creature’s first model representation, it is unlikely to be the last.

If you caught my last post on Safari’s Amargasaurus, this is yet another splashy figure slated for wide release next year. So far as the paint job is concerned, it’s almost like a prehistoric parrot with bright red, blue, and green hues. I love how it has skin, feathers, and scales like modern day ostriches. The stretch of its legs suggests the animal is “running,” likely in escape and, considering all the “hellish” hype its gotten, one would expect a more aggressive pose.  Its face even further contradicts its fearsome moniker by looking a bit, well, happy. I give Safari credit for making sure Anzu’s maiden model voyage is a nod to its modern bird relatives rather than that of a monster (not that there’s anything wrong with monsters, of course).

I love its feathered arms and fan tail which also serves to balance this model well. I expected all kinds of trouble setting it up in my light box but, I’ll be darn, it stood just fine. 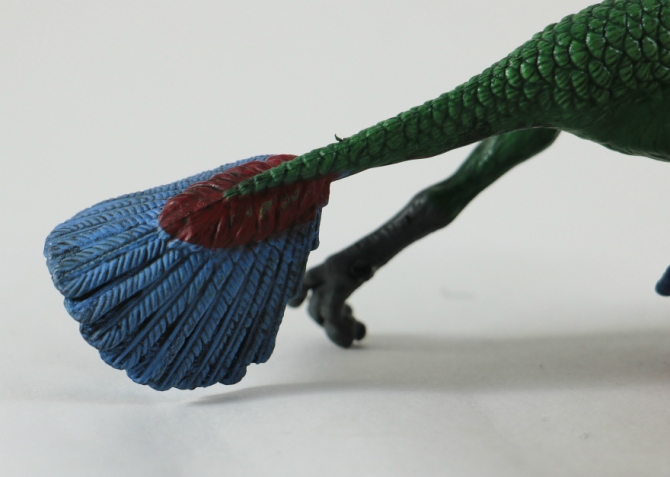 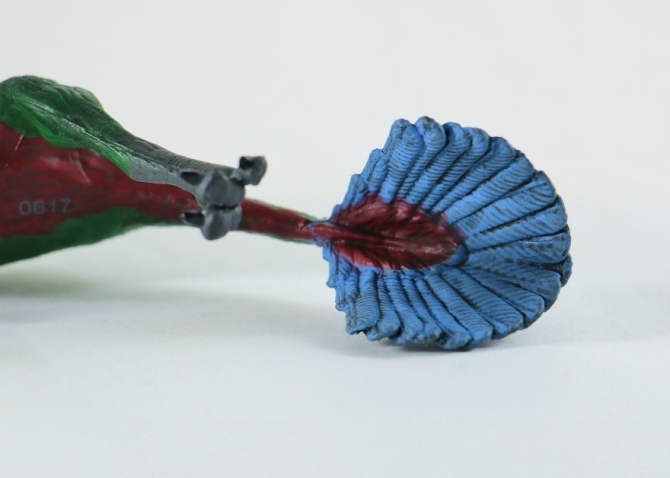 General Appearance: For a dinosaur making its toy/model debut, it sure knows how to make a bright entrance!

Display or Diorama worthy: I think it could work quite well in a diorama or even a bit of desk swag (he’s actually sitting on my work desk now).  I’d love to eventually get it on a small shelf alongside other feathered dinosaur models or a set of these with the same color scheme in different poses.

Have any dinosaur news, reviews. photos of your personal prehistoric collection, or a Prehistoric Pit Stop you’d like to share? Shoot them to David Fuentes at davesdinosaurs@gmail.com!

One thought on “Safari Ltd. Unleashes the “Demon” with their 2018 Anzu Wyliei!”