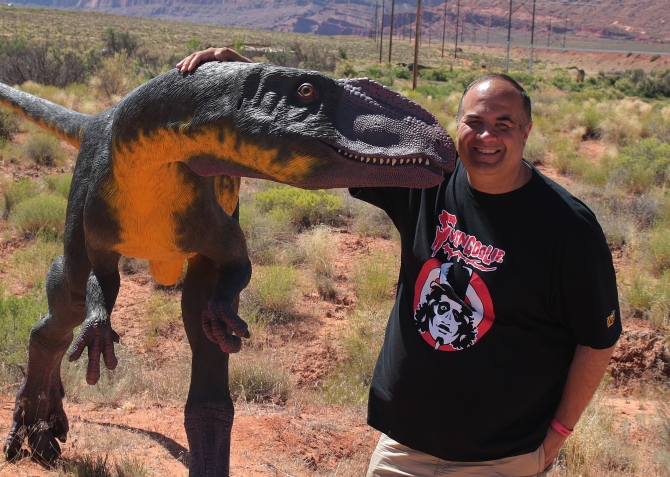 Although this blog is new I’ve actually been writing them since 2010 via an old school horror/science fiction site called “Terror from Beyond the Daves” (terrordaves.com). I’m happy to say that it’s still going strong and led to some amazing things, such as a coveted Rondo Award for “Best Horror Blog” in 2011 and a multitude of amazing experiences and friendships. That blog was conceived by a mutual love of horror hosts (in our case, Svengoolie) and monsters which we never outgrew. Not surprisingly, I idolized the “King of Monsters,” himself, Godzilla above all others and there was never any doubt that this devotion was somehow connected to my love of dinosaurs and prehistoric beasts. In fact, before Kenner STAR WARS toys entered the picture, I’d spend hours of my youth playing with dinosaur toys in the sandbox while anxiously awaiting the next episode of Land of the Lost. I also remember watching The Beast from 20,000 Fathoms on Saturday afternoons and dreaming about how I’d one day be a paleontologist like the one in the film; having a work desk right next to the skeleton of an Apatosaurus. While most kids romanticize the idea of becoming a Paleontologist, very few actually make good on that when they grow up. That doesn’t, however, mean that we have to outgrow our devotion to them or our desire to learn more. In fact, the older I get, the more fascinated with prehistoric animals I become; from dinosaurs, goliath-sized mammals on land, terrifying aquatic reptiles and fish of the sea, to the giant Pterosaurs flying above. I’ve even started collecting dinosaur toys and memorabilia which has sure improved in quality & detail since those days in the sandbox back in the ‘70s. Every year I try and plan at least one road trips that involve a dinosaur themed destination while wondering how I could fit them onto a horror themed blog. Finally, I decided to bite the bullet and give this topic its own site entirely. So if you love dinosaurs and prehistoric “monsters,” you’ve come to the right place! I hope it inspires some trips of your own along with a greater appreciation for the animals that once ruled our planet.